Yaëlle David, born in France, lives and works between Paris and Tel-Aviv.
Born in Paris (1982). Yaelle painted aquarelles and practice photomontage since the age of eight. Then she learned her collage tecnique in the studio of Jean Charles Yaich in Le Marais. Graduate School of visual arts media in Paris and Brooklyn College (New – York) in interactive media arts.
She is among the world’s leading designers in the interactive design after she started by working in the branding design and packaging world.
In 2007 she came to Israel to visit relatives and decided to plant roots here. Now lives in Tel Aviv, her painting studio in her house designer for companies in Israel and abroad. Despite drawing from a young age now is the first public exhibition. 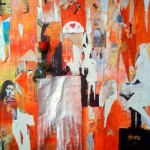 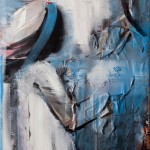 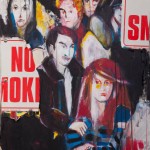 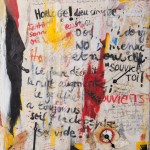 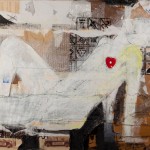 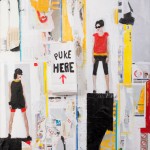 Artist statement:
Sometimes with humor or poetry, travelling between reality and imagination, my artwork is a revival of the “arte povera” and pop art movements, both movements dealt with making meaning out of everyday life. My work is more oriented towards intimacy with a touch of Fernanda Gomez’s freedom and audaciousness.
The aim of my work is to divert or reshape conventional things in order to offer new colors and depth to traditional “clichés”. I want to make people think about new layers in their daily lives through simple materials. By adding layers and changing contexts, I try to suggest a new point of view.
I collected materials from the streets of Paris, New York, London and Tel Aviv, with their own stories to create new colors, new shapes and new dimensions, in order to tell a new story by juxtaposing them on a canvas.

I give new life to abandoned objects that have lost their value using the collage technique that allows several layers to mix feelings and materials.
Randomness becomes destiny in a world where the intuitive and the spontaneous are measured and thought. As Antoine Lavoisier said “nothing is lost, nothing is created, everything is transformed”.